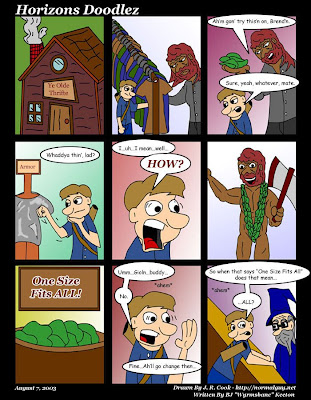 And today we have another blast from my past. I was searching through my old writing folder a few days ago when I ran across the only webcomic I ever had anything to do with.

Below is the only one of the comics that ever came to fruition, though I did find a script I made for a second one. I can’t remember what happened to make us not keep producing them, but I think it’s funny to find silly stuff like this tucked away that I had almost forgotten completely about.

—
You have just read a post from Professor Beej.

B.J. KEETON is a writer, teacher, and runner. When he isn't trying to think of a way to trick Fox into putting Firefly back on the air, he is either writing science fiction, watching an obscene amount of genre television, or looking for new ways to integrate fitness into his geektastic lifestyle. He is also the author of BIRTHRIGHT and co-author of NIMBUS. Both books are available for Amazon Kindle.

View all of B.J. Keeton's posts.